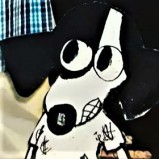 Gneeecey—and Nicki Rodriguez and Vicki Solá—here, welcoming you to Gneeecey.com, where you’ll find out about Vicki's laugh-loaded Sci-Fi Fantasies for ages 10 to 110, the BRAND NEW You Can't Unscramble the Omelet and her first book The Getaway That Got Away, and all about wacky canine-humanoid Diroctor “Bizzig” Gneeecey, AKA The Grate One, and hardworking young radio DJ Nicki, who just wants to go home! We’re jam-packed with photos and drawings! AND BRAND NEW E-BOOKS, "Gneeecey's Glossary and Other Stuff," "Gneeezle's Menu," and "Gneeecey's Pals"! 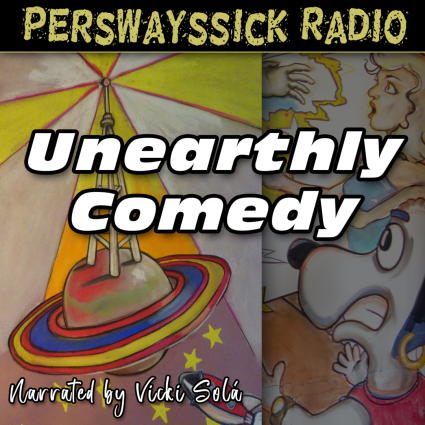 Escape into the bizarre fantasy sci-fi dimension of Perswayssick County as author and radio personality Vicki Sola breathes life into its madcap inhabitants. When earthling Sola morphs into alter ego disc jockey Nicki Rodriguez and clashes with zany extraterrestrial canine-humanoid Gneeecey (and the evil aliens out to get him), the fun and laughs begin!

There are laughs aplenty at:
https://perswayssickradio.buzzsprout.com
Plus you can also listen to the adventures of my alter ego Latin music DJ Nicki Rodriguez and zany canine-humanoid Gneeecey on SPOTIFY, GOOGLE PODCASTS, APPLE PODCASTS, iHeartRadio, Stitcher, Deezer, TuneIn + Alexa, and more! 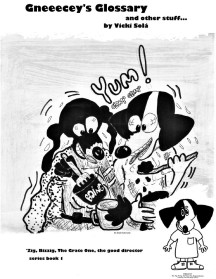 By popular request, author Sola presents "Gneeecey’s Glossary and Other Stuff.” This fun handbook eases the culture shock for readers of all ages as they navigate the unearthly world of Perswayssick County.

“Gneeecey’s Glossary and Other Stuff” complements Sola's humorous Sci-Fi fantasies, "You Can't Unscramble the Omelet" and "The Getaway That Got Away.” Both detail the perilous adventures of young radio DJ Nicki Rodriguez, trapped in a dimension located somewhere between her native New Jersey and outer space. Nicki’s life is never the same once she encounters greedy, zany canine-humanoid “Bizzig Gneeecey.” (This walking, talking, and exasperating Jack Russell is the power-hungry leader of Perswayssick County.)
Character biographies, personality analysis, definitions of strange words and expressions, plus drawings are included. Enjoy being lost in this wacky world!

Click on the pic to get your copy of “Gneeecey’s Glossary and Other Stuff"! 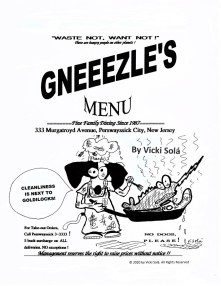 What’s a starving Earthling to eat when trapped in a bizarre dimension located somewhere between New Jersey and outer space? Lo and behold, here's an alien menu that was snuck back to Earth after such an accidental trip to zany canine-humanoid Gneeecey's unworldly Perswayssick County!

Click on the pic and get your “Gneeezle’s Menu: Astronomical Gastronomical Adventures” now! 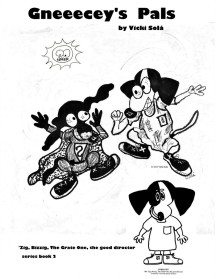 Vicki Sola's zany short stories, suitable for all ages, will provide you with well-needed laughs! These tales (as opposed to tails) feature wacky characters related to her fun Sci-Fi/Fantasy works, You Can't Unscramble the Omelet, and The Getaway That Got Away. Included here is a hilarious interview where alien canine-humanoid Gneeecey attempts to provoke the usually unflustered author Sola. And there are the unauthorized excerpts from Gneeecey’s WGAS-TV’s program guide! Visit Perswayssick County and escape reality!

Click on the pic and get your copy of “Gneeecey’s Pals” now!

https://www.amazon.com/-/e/B07J29RVMQ iis the place to go to get paperback or

e-book versions of  "You Can't Unscramble the Omelet" and "The Getaway That Got Away," and new e-books "Gneeecey's Glossary and Other Stuff," "Gneeezle's Menu," & "Gneeecey's Pals"!

Check out my author interview at NFReads.com:

And hit the button below to check  out all of the other interesting articles and inspiring stories on NFReads.com:

YOU CAN'T UNSCRAMBLE THE OMELET 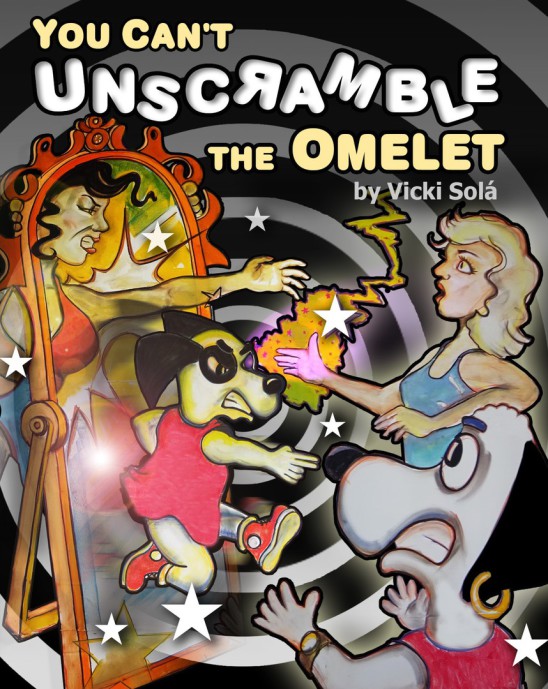 Recent college grad Nicki Rodriguez always believed courage and determination would get her through anything, even interdimensional travel...until now.

Just as Nicki struggles to settle back into life after barely surviving a visit to an unearthly locale, its zany canine-humanoid leader Gneeecey comes banging on her door. But little does he realize that alien gangsters have followed him. Nicki and the walking, talking (and exasperating) Jack Russell dog flee in terror, hurtling through space and time. When they land, it’s double trouble, danger squared—and a bunch of laughs, too. Nicki and Gneeecey find themselves stranded in a bizarre universe where they confront their evil lookalikes, and Nicki discovers new things about herself.

One thing is for sure, though. Nicki and Gneeecey will have to stop fighting and pull together if they ever expect to get out alive.

“You Can’t Unscramble the Omelet” now!

THE GETAWAY THAT GOT AWAY is available in paperback and on Kindle, Nook & iPad ﻿ 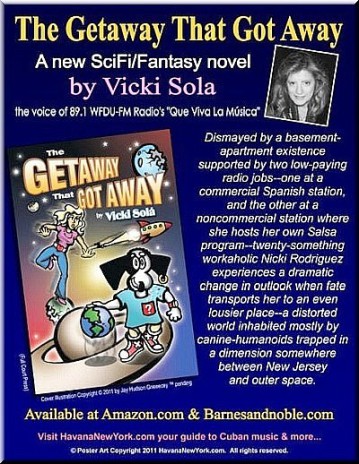 A letter to author Vicki:

The Getaway That Got Away

(Will Gneeecey ever learn to lock the bathroom door?)

He worked hard to earn all the extra vowels, too! 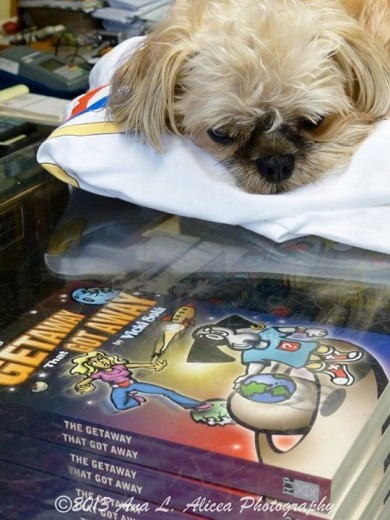 Tango is the new President of Gneeecey's Fan Club. Shown resting here, he's just finished reading four copies of The Getaway That Got Away.  He confided to his friend Ana that he wishes he resided in lovely Perswayssick County, where he'd be able to drive and maybe even run his own TV Network.  And restaurant.  And run for political office.  And boss humans around...